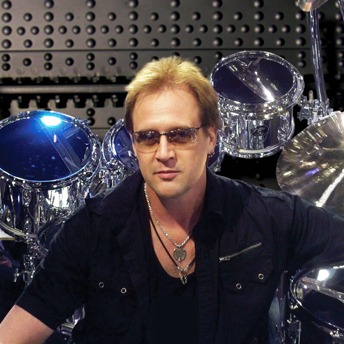 It seems that some of our most influential artists are born in small quiet towns, and Bart Robley’s story is no different. Raised in a small farming community near Denver, Colorado, Bart felt his calling very early. Perhaps it was the peaceful air of his hometown or the fact that he was raised close to the earth, but somehow he was able to concentrate on the music that he heard in rhythm. Naturally, when it came time for him to choose an instrument in elementary school, he chose the drums.Through his many projects, Bart learned the nuances of rock, country, jazz, hard rock and heavy metal. As his thirst for musical adventures grew, so did his need for larger projects. So he bid goodbye to his small town life and, in 1989, relocated to California.Bart networked the L.A. music scene and met fellow musicians Steve Cenker and A.J. Schad. This formed the basis for an original band named War Crime. War Crime released two albums on Black Wall Records, became a hit in Southern California and garnered huge support with European airplay and sales.After War Crime had run is course Bart returned to studio work and live performances as a “hired gun” in many diverse projects from country to hard rock. It was one of these situations that led to Bart being hired full time by Southern Rock mainstays The Sam Morrison Band. Morrison recognized Bart’s undeterred dedication to not only the craft of drumming, but to the business of making music. This was essential for rebuilding SMB into a reckoning force.With the release of the first full-length album from now-invigorated SMB, solid reviews and packed houses are a testament to the new sound that is already a favorite at biker events and venues and working its way into the main public bloodstream. In 2007, SMB signed with Titan Tribute Media and legendary record producer, Michael Blum, to record their show “Turn The Page,” a Tribute to Bob Seger and the Silver Bullet Band.Bart also regularly writes for Classic Drummer Magazine contributing his vast knowledge of drumming for the column “Advice From a Pro.” In 2007, Bart’s first instructional book and DVD, “The School of Hard Rocks” was published on Centerstream Publishing, distributed by Hal Leonard. In 2009 Bart won a Telly award for this DVD. He has since gone on to produce two more instructional DVDs, “ASAP Drum Setup” and “Drums ASAP Rudimental Drumming.” In 2010, Gretsch Drums announced they would be including Bart’s DVD “ASAP Drum Setup” in their new Gretsch Blackhawk kits.As a final note, Bart would like to thank the companies whose products help form his sound, and with whom he actively endorses: Gretsch Drums, Aquarian Drumheads, Sabian Cymbals, Gibraltar Hardware, Vic Firth Sticks, Trick Bass Drum Pedals, Kick Port, the Kelly Shu, Gorilla Snot and Drum Star Wear Clothing, The Stick Hammock, Kick Pro bass Drum Pillow, and The Drum Web.