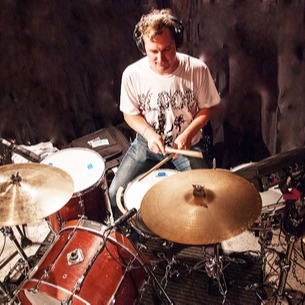 Blake Colie is an experienced, in-­‐demand drummer and percussionist, whose stage and session work have brought him from national tours to television appearances to some of the most legendary studios in Los Angeles. In this last year Blake has become the drummer/MD of UK-­‐based Tropical Pop artist Hollie Cook and was part of her very successful first American tour at the end of 2014. Following her recent 2015 performance at the Bahidora Festival in Mexico, Blake is currently working on writing/producing new material for Hollie for her next album release. This current year also marks the release of the much-­‐anticipated album, “Soul Riot” on Stones Throw Records, which is the third LP to be put out by the drummer’s Reggae/Rare Groove/Soul group The Lions. On the stage, Blake finished multiple national and international summer shows and tours with Hollie Cook, The Lions, his new group Jamaican/Brazilian Soul Jazz group Crucial 5, as well as Salvador Santana, son of 8-­‐ time Grammy winner Carlos Santana, having opened on multiple West Coast shows for Carlos for his 2014 Corazon World Tour. In the studio, Blake is working with the R&amp;B/Reggae project, The Decoders, who finished up their first release “Lovers &amp; Dub Classics” on Japanese label Inpartmaint Records and were the producers of Jazz Saxophone star Mindi Abair’s latest Grammy-­‐nominated album “Wild Heart” for Concord Records. His other recent notable recording credits include the upcoming album by German pop star Adel Tawil, Brazilian star Seu Gorge &amp; Almaz’s 2010 release “The Model” (Now Again Records), and the soundtrack for the 2010 video game best seller “Red Dead Redemption” (Rockstar Games). As composer/producer, Blake was a key member in the creation and production for the soundtrack of the 2013 indie-­‐ movie “Sunken City”. The movie and soundtrack would go on to win the “Best Use of Music” Award at the 2014 Julien Dubuque International Film Festival in Iowa. Blake’s projects and his own works have been featured on TV shows such as “Breaking Bad”, “The Wire”, and “Eastbound &amp; Down”, on feature films such as “Ruby Sparks”, “Young Adult”, and “This Means War”, and on the television networks AMC, Style, Bravo, MTV, VH1, Oxygen, Showtime, Logo, USA, Spike, and the BBC