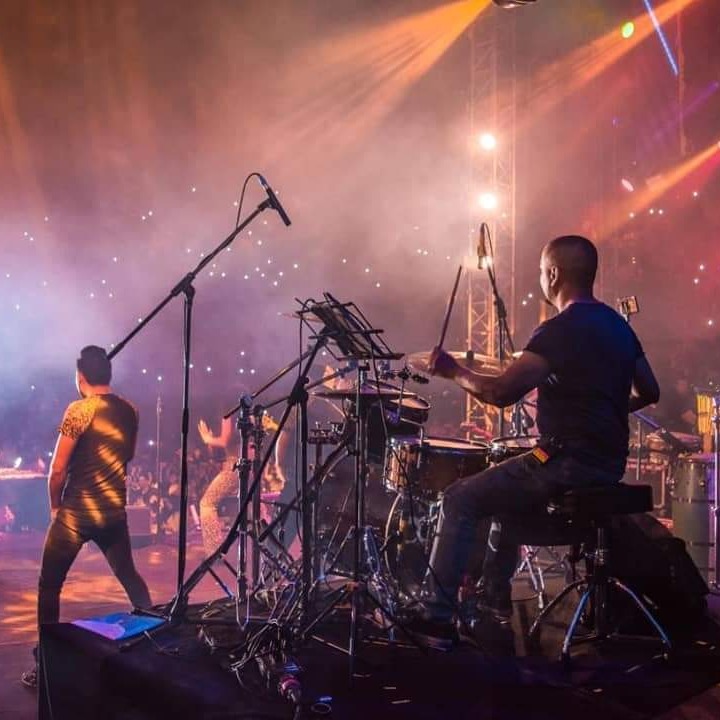 At the early age of 11, he started playing the drums. Four years later he studied with the drummer Esteban Torres for 2 years, who taught him to obtain a technical development. Also he was part of some pop and rock bands.At his 20s, he had a self-learning period of 4 years. During that time he worked on the theoretical and technical aspects of the instrument, achieving a better academic development.In 2002 he worked as drums’ teacher at the Mozarte Music Institute; at the same time and place he studied music and two years later he was part of the Percussion studio which was directed by the teacher Carlos Alban. Down there he had the chance to study and work as the teacher assistant.In 2004 he met the Cuban drummer Oscarito Valdez and took his Afro-Cuban rhythms’ course.In 2006 he studied in the Contemporary Music School at San Francisco University of Quito (USFQ). Among the drums’ teachers we can mention to: Sergio Reggiani (Argentina), Matt Witek (USA), Pascoal Meirelles (Brasil), Key Ychicawa (Lima), Michael Khin (Germany). Later on, he was part of the teachers’ team. Since 2013 to the present, he is working as drums’ teacher in the Music School at UDLA (Universidad de las Américas).In 2016 he’s got his Master's Degree in Music Education at the School of Arts of the University of Cuenca.He was part of some bands such as: Mate Jazz, Giro Jazz, Jeffry Eckels jazz Trío, Urgencia Interna (Suiza), Target Jazz trío, Pamela Cortés, Ultima Tentación, Pancho Terán, Latin Sound Perú, Sebastian García. Also he was part of the BIG BAND of the Contemporary Music School of San Francisco University of Quito (USFQ) for 5 years and at the S.E.F. Jazz Trío together with the Spanish pianist Samuel Labrador and the recognized bassist Jeff Berlin.He has worked as session musician in some studios in Quito for some singers and bands. He was part of Dario Castro’s band (Verde 70 ex vocalist) and has performed some recordings for his solo album “Naturaleza Humana”. He was part of the reality show “Yo me llamo” (2013-2014) which was organized by Teleamazonas. During the last week he had the chance and honor to play with Alberto Plaza.