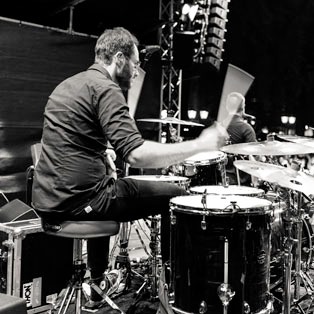 Igor is a live and session drummer based in Paderborn, Germany. He studied at the High School of Music and Arts in Hamburg as a student of Curt Cress and Jost Nickel.During the last years he played in many different bands including styles like Rock, Pop, Hip hop, progressive Metal and many more.He toured with several german artists includingF.R. (Fabian Römer) with whom he was supporting the German superstar Tim Bendzko in 2012 during a six week tour through Germany,Switzerland and Austria.Since 2010 his main project is the band “Dreadnut inc.“ In 2011 they released their debutalbum "First Drop" which leveraged them toaround 70 gigs a year. Igor isn`t just a professional drummer but also gives workshops on drums and piano.In his own Studio he records drums for several artists and Studios! Some of them were KoolSavas (German Hiphop legend), SimonKurtenbach, Zeitsprung, Kleemusic and manymore.