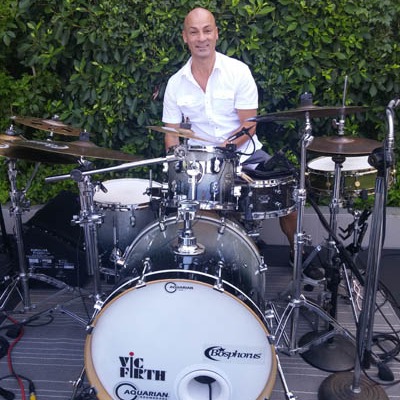 Joe was born in New York State and moved to The Big Apple after graduating college with a music performance degree. During the early years of Joe’s career in NYC, he performed in various groups with some of the best jazz musicians in the world. He has performed with bassist Ben Wolfe, trumpeter Joe Magnarelli, saxophonist Jerry Weldon, trumpeter Tom Harrell and pianist Joel Weiskopf to name a few. When not touring, Harry Connick Jr. and musicians from his band would sit in with Joe’s jazz quartet. Joe’s has some jazz chops, but considers himself an accomplished rock, blues, funk, pop and country drummer who spent many years recording and touring the east coast music scene and regularly performed at national festivals. In 2004, Joe left NY for the southwest in search of warmer weather, new industry connections and more opportunities to tour and record. His pocket groove, stylistic approach and the depth & breadth of his musical knowledge, was greeted with open arms. Joe stays busy with a heavy regional live performance schedule, touring to other parts of the country, recording drum/percussion tracks for various artists and giving back through his clinics. In addition to his time spent behind the kit, Joe runs Onstage Entertainment Group, which books concerts, events and music for a variety of venues and bands. In 2016, Joe founded The Performers Institute, which was created to educate people following their dreams and passion of the performing arts, how to create sustainable careers. It gives the performers a concrete foundation of the business aspects of being a performer in addition to the musical knowledge needed to get ahead and stay ahead. When in Arizona, Joe often performs with well-known organist Papa John DeFrancesco and Joe recently invited the great bassist, Mel Brown, to work in his group, The Joe Costello Project at the Omni Scottsdale Resort & Spa. Look for Joe’s other group, The Joe Costello Syndicate the 1st & 3rd Saturday of each month at Kazimierz World Wine Bar in Old Town Scottsdale. Joe has also performed with Damon Johnson (guitarist/vocalist for Alice Cooper, Thin Lizzy, Brother Cane, Black Star Riders), Joey DeFrancesco, Kenny Passarelli (bassist for Joe Walsh, The James Gang, Elton John), Johnny DeFrancesco and Francine Reed (backup vocalist with Lyle Lovett), Eddie Turner, Kara Hesse, Kevin Miso & country artist Brian Collins.