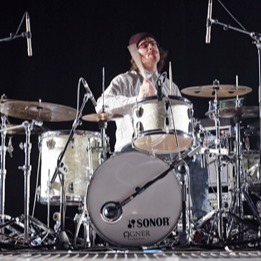 """Joe Styppa"" is not only a drummer with an extra ordinary mustache - in the last few month he got more and more famous as a drummer in Germany, Austria and Switzerland.Actually he is well known as the drummer for the bands ""Konvoy"", ""AUST"" and ""Estikay"" and also as Musical Director of the TV-Band ""Sing um dein Leben"" and Cassandra Steen (+Live Drums), as well as a producer and songwriter of many other artists. Joe is not only a musician - he is a brand and a person with a lot of experience in being a musician and a friend.So after his first single-video-project - ""Drumsolo Steamboat Willy (Disney 1928)"" he wants to do the next step with the remake Video of ""Carry The Weight"", produced by Rorofilm. This Video and Song is about playing drums as drummer who loves his instrument and feels it. And it's about Joe - and his mustache you will keep in mind forever!"