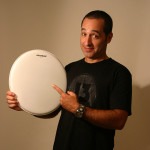 Born in Whittier California on November 12th 1968, Nick began playing drums when he was 4 years old. "I went to the front door on Christmas Eve because some one knocked on it and when I opened the door to see who was there it was a blue sparkle Ludwig kit sitting there already set up. Did Santa carry it like that on his sleigh? I don't know but from that moment on I knew Santa was one cool cat. ...From there my Bro turned me on to Led Zeppelin and Genesis and the rest is history. I was a rocker from then on. I have to say I am very lucky and blessed. The drums came to me pretty easily and don't know why. I don't have any other drummers in my family."After high school, Nick attended the Dick Grove School of Music in Los Angeles. After studying drums for a while, Nick shifted his focus to the study of music theory/songwriting and vocals. Dispite the change in major, Nick continuted to play drums activley at the school with his fellow classmates.In 1990 Nick won the very 1st Guitar Center drum off and in 1992 he was first introduced to Neal and Al Morse at a blues jam in Studio City, CA. "We ended up sitting in together by pure chance. Neal told me about some PROG tunes he had written and that him and Al were thinking of putting a band together. I went with my wife Tiffany to Neal's house in LA and got the demos. I liked them very much and to make a long story short, I joined the guys and we started SPOCK'S BEARD. We didn't call our selves that at first, I think we called our selves AUGUST and then ONE. We played around town a few times but didn't do that much. Spock's ended up taking off a few years later.