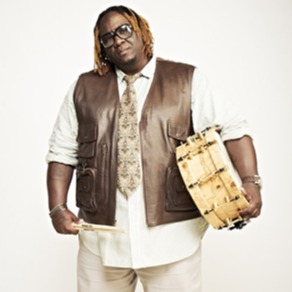 Drummer, Smoktagous77 was born with a unique gift from God to be a drummer. Given the nickname Smok (Smoke) for his precise power and speed behind the kit. As an infant, Smok would sit on the lap of his grandmother and play along the beat as the choir sang at his childhood church in Detroit, MI. As years would later pass he found himself being the lead drummer out of a line of 7 or more young inspiring drummers playing for that same choir at his church. Seeing the vast varieties outside the church scene, Smok sought to further his skill by playing for most of Detroits premier local gospel artist at an early age and also became apart of his high school jazz and marching band where learning to read music was a requirement! With music being a focal point in young Smoks life and wanting to excel even the more; a great opportunity gave Smok the chance to not only work for, but to also be taught by Sun-Ra's own, Francisco Mora as he learned different styles and cultures of World Drumming.To this date Smok has played, recorded and toured with great influential artist ranging from gospel premier artist, Tramaine Hawkins to the soulful r&amp;b vibes of Chico Debarge, just to name a couple. Now currently residing in Atlanta, GA Smok has worked with some of ATL's finest hip hop artist. Most recently being 2x Hip Hop Grammy Award winners, Arrested Development. But it doesn't stop there...Smok has also played for multi Atlanta artist of different music genres ranging from hip hop, rock, jazz, fusion, blues, country, alternative, pop, greek, gospel etc. Smok is a firm believer that the skys are the limit. Never limit yourself to just 1 style of music and make your own voice behind the kit!Currently Smok is on tour with Arrested Development