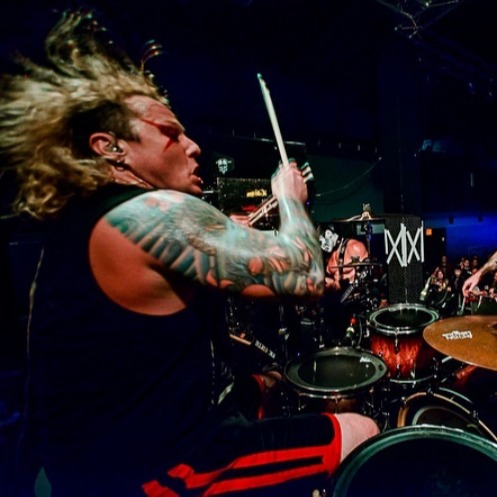 Wade Murff's passion for music began with his first drum kit at age 4. Despite his young age, Wade's love for playing drums never wavered. He started his first metal band at age 15 and has not stopped performing since. He credits John Bonham and Alex Van Halen as having sparked his interest in rock drumming. But, it was Dave Lombardo and Vinnie Paul who fueled his desire to become a hard-hitting metal drummer.At age 18, Wade moved from his small town to Portland, Oregon and quickly developed a reputation as a drummer that went completely ballistic live, while maintaining groove and keeping solid time. When asked about his playing style, Wade says, "Don't get me wrong, I appreciate technique and precision, but I love seeing drummers that hit hard and play with a lot of heart and physicality. Live, I always want to play on the edge between control and chaos; something could break at any moment, someone might get hurt...especially me! Haha! Seriously though, I'm committed to delivering that type of show every night, no excuses."Who did Doyle Wolfgang von Frankenstein of The Misfits call when he needed a drummer to join his new band, Doyle? Wade Murff. Wade's intense drumming style fits perfectly with Doyle's energetic performances. Doyle is a busy band, too, with tours lined up all year covering a lot of the globe.