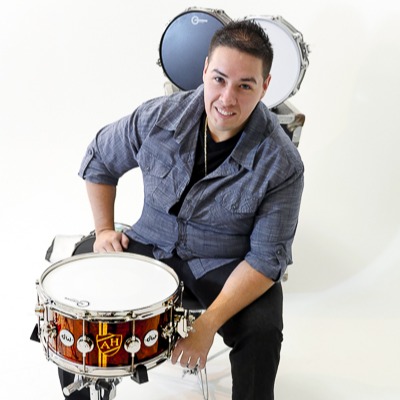 Aaron Holler is a drummer whose love for music has won him a place among the best Tejano drummers today. Aaron, a drummer for Tejano artist Jay Perez, never was fortunate enough to have a formal education in music nor hire an instructor to give him private lessons in music theory or drums, but with purpose and drive his undying determination has seen him through as a very successful self-taught musician.Aaron was born in Pontiac, Michigan on March 6th 1984. At a very young age Aaron has always loved music and drums, he displayed an articulate focus and desire to tap out rhythm on each and every surface using any tool he could find. Aaron began playing a children’s drum kit when he was 5 years old and by the age of 12, he began his professional career as a live performing musician working with several local bands touring throughout the Midwest.From the 5<sup>th</sup> grade through graduating high school, Aaron taught himself to read, write, and perform as an accomplished percussionist from the experiences he gained by participating in band; which was part of an elective curriculum in the Lake Orion Community School District where he would later graduate from in 2003.Aaron learned his drumming techniques by listening and practicing the skills of his favorite drummers which include, but is not limited to Buddy Rich, Dennis Chambers, Vinnie Colaiuta, Steve Gadd, and Dave Weckl. Aaron has always maintained the habit of taking note of and appreciating his favorite music since he believes that is the best way for one to perfect a skill. Aaron has mastered many techniques from various artists and has amalgamated these skills to make him the outstanding drummer that he is today.Since 2005 Aaron has been the foundation and drive of Tejano artist Jay Perez and The Band while residing in San Antonio, Texas. With the widespread notoriety that Jay Perez presents himself with by being one of the top acts throughout the genre, Aaron has been able to influence future Tejano drummers by redefining the way drums are played within the genre with his unique approach and humble attitude towards his craft. Throughout Aaron’s time in San Antonio, he has toured, and recorded with many of the most successful artists to ever come along in Tejano music. All while gaining accolades himself by being a multi-Grammy award nominee, recognized amongst his peers as one of the best by being nominated for drummer of the year, and part of the band who last won the Tejano music award for “Showband of the Year”.