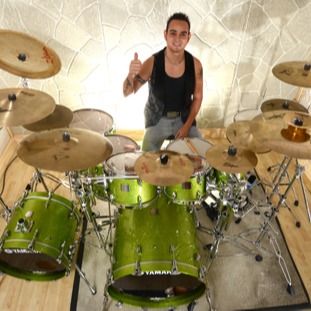 Alex Gómez was born in Guadalajara Jalisco México December 20th 1980. At the age of 6 Alex discovered an irresistible attraction towards the drum set and music in general under his biggest influence his father Jose Gomez (professional musician). At the age of 13 he enrolled in the Conservatory of music of Guadalajara (U.D.G.) and participated in several master classes with many great musicians, Joey Heredia, Alvaro Lopez Jr. Gregg Bissonette, Antonio Sanchez, and many others. At the age of 15 he began his professional career as a Studio musician working with several local bands. His introduction to the big city at the age of 19 was in the expromusic festival 2000 with his jazz Quartet McKanne, at the time they where one of the youngest and most recognize Jazz bands in Guadalajara. Since then, he has been offered work as a professional musician in México City, working with several artists as a studio Musician and touring in many countries with many artists like: Belinda, Yuri, Francisco Céspedes, Ha Ash, Cristian Castro, Lupita Dalessio, Alejandra Guzmán, Rio Roma, Emmanuel, Ricardo Montaner, Luis Fonsi, Torre Fuerte, David Bisbal. He is currently playing with his band and Music of fromhis first album called (Calle Doce) and on the Mexican jazz scene, recently was invited to play with Tom Coster (Jazz Master, Santana, Vital information, etc.) Alex has conducted clinics and master classes in Mexico & Latin America.