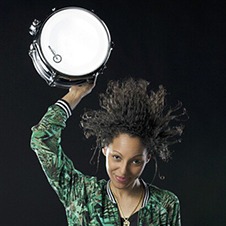 "Alicia Warrington is a freelance musician and current drummer for, British Pop artist, Kate Nash. She has played with Kelly Osbourne, Lillix, Miley Cyrus (Hannah Montana), Dawn Robinson (En Vogue), Uh Huh Her, The Dollyrots, Gore Gore Girls, Chris Rene and many others. Alicia’s big break happened when she began working as Kelly Osbourne's drummer on the MTV reality hit ""The Osbournes”. That led to many Television, film, and touring appearances.Aside from co-writing Pop songs and working with Kate Nash, Alicia is currently finishing up her debut EP, as the Solo Death Metal artist, DOHRN.“Alicia is one of my favorite drummers I’ve worked with. She and I have performed together on countless stages in front of multiple millions of people … yet she remains humble and every bit as dedicated to the art as the first day we met. She is a fantastic musician, a true professional and a great friend.” - Mat Dauzat (Kelly Osbourne / Sessions / Producer)“Alicia is not only an incredibly creative and solid drummer, but she is so fun and easy to work with. Anyone who has a chance to work with her is lucky!” - Tasha Rae Evin (Lillix)"

End Of Days
DOHRN
Voices in My Head
Light FM
One Big Happy
The Dollyrots
Have A Crappy Summer
The Dollyrots
electric.
The All-Girl Boys Choir
Walking Miracles
The All-Girl Boys Choir
I See Red
Uh Huh Her
Ladies and Gentlemen...The Bruises!
The Bruises
Starstruck Obsession
Kelly Mantle
Changes
Kelly Osbourne
Earth Science Club
The Otterpops
Behind Closed Doors
Fudgegun
If You Could See My Office
Fudgegun
Knowledge For Its Own Sake
Dropping the Messiah
Ripping Your Mind Apart
Purgatory