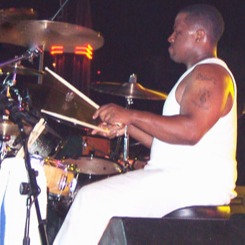 "Anthony Beverly, co-Founder, Producer and A&amp;R Director for Brantera Music Group, Inc. is no stranger to the music industry. As the only child of R&amp;B legend Frankie Beverly, Anthony’s entire life has been centered around the making and performance of great music. As a child, Anthony toured with his father’s band, Maze and experienced R&amp;B music’s best such as Chaka Khan, Anita Baker, Luther Vandross, Rick James, Natalie Cole, O’Jays, Gerald Levert, Phyllis Hyman, Teena Marie and many more.Although he started playing drums when he was 4 years old, at age 20, Anthony began his career in music as a professional drummer. Anthony has toured the world playing with artists such as Christopher Williams, Troop and Maze featuring Frankie Beverly. Anthony has also performed on numerous albums (independent and major labels) including gold and platinum recordings with Troop and Maze and other session work. He is also a songwriter and producer, utilizing the natural gifts and acquired skills sharpened by his years of experience and exposure to the best in music.Through Brantera Music Group, the independent label co-founded with his wife (entertainment attorney Heather Nelson-Beverly), Anthony created the ultimate tribute album to his father entitled, “Silky Soul Music….An All-Star Tribute to Maze f/Frankie Beverly”. The project was created by Anthony to properly honor his father’s contributions to the music industry. Anthony served as a drummer, producer and one of the executive producers of this project celebrating his father’s many accomplishments including 30 hit singles, twelve albums and more than forty years in the music industry.Anthony, Grammy nominated hit producer Rex Rideout and Grammy and Stellar Award winning producer Donald Lawrence assembled some of the most recognized voices in music such as Mary J. Blige, Joe, Musiq Soulchild, Kem, Raheem DeVaughn, Ledisi and The Clark Sisters for one common goal: to pay tribute to a his father….a living legend.“With Maze, my father helped shape one of the most influential sounds in modern history,” says Anthony. “I am excited to pay tribute to his legacy by working with artists who embody the spirit, appreciation and vocal talents consistent with Maze’s sound and message.”Anthony is also a music director-assembling some of the nation’s most talented musicians to perform at various private events and entertainment venues."