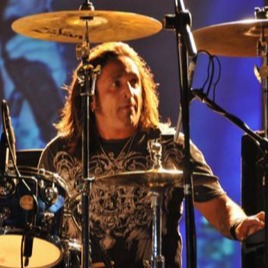 Audie Desbrow, of the platinum selling rock and roll band Great White, is one of rock's most energetic and gifted drummers. Desbrow, a native of Southern California, began to self teach himself at age 9. Going strong for over four decades, Desbrow began with Great White 28 years ago during which time the group hit the top of their commercial success, selling over 10 million copies worldwide with hits such as "Rock Me", "Once Bitten,Twice Shy", "House of Broken Love", "Save Your Love" and "Face the Day." 1989 saw the band receive a Grammy nomination for Hard Rock Performance Category. 1990 was another year of milestones.Performances include:The American Music Awards as well as being the 9th band ever to do MTV's Unplugged, and over a dozen videos. Desbrow, who is mentioned in several publications, such as Drum magazine, Modern Drummer, and "Rock n Roll Rush" by Lawrence Hull (2007) is admired by up and coming drummers. He credits his Mother for "her profound influence on me to stick with drumming." Desbrow also claims Ringo Starr and John Bohnam as major musical influences. After coming back from a European Tour in March 2008, Desbrow is still traveling with Great White, on the group's 27th Year Reunion Tour,in support of their latest album, RISING, playing in sold out venues all across the globe. "Drumming is what gives me my salvation and my reason to express myself through the power of music. I'm grateful for the gift God has given me.