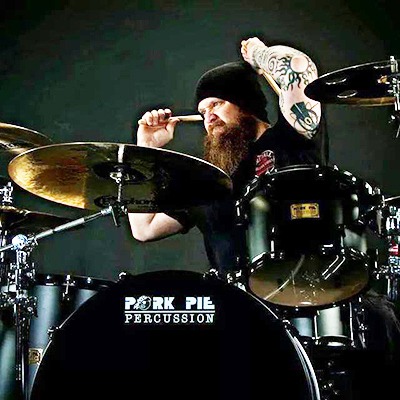 Chad Gravitt (The Beard) is a professional drummer and percussionist with over twenty-five years of experience as a band member with some of the most renowned bands in the Midwest. He has managed, booked and promoted numerous bands, as well as participating as a guest musician on many studio recording sessions and albums. EARLY BACKGROUND: ‘The Beard’s’ career began long before he was able to grow a beard. He began drumming before he started walking and by age two, he had put together his own drum set from coffee cans, Tupperware and any household object that made the sound he was seeking, including the family’s coffee table. His burgeoning talent was undeniable, so at age eight, he enrolled in the school’s music program, which he continued through high school in the drumline of the Henry Clay High School Marching Blue Devils. Throughout school, he also took private lessons from local musicians. By age fifteen, he was told by a professor at the University of Kentucky that he should audition for the Central Kentucky Youth Symphony Orchestra. He was accepted into the Orchestra as percussionist and performed with the group until graduation. At age sixteen, Chad recorded an audition tape for The Julliard School @ Lincoln Center in New York and was invited to come to the school for a tour. Because of his age, he was not able to move to New York; however, his skill set and talent were noted by the audition board at Julliard as ‘extremely talented’. SEASONED TOURING AND RECORDING DRUMMERFloraburnTithesBest Selling AuthorsGroovezilla(BMG/MMS)Beautiful and To My Enemy(featuring members of Primer 55,Soulfly)The G-Funk AllstarsH.R.(bADbRAINS lead vocalist)Face the DayTheRudiesDougie Simpson(intl.reggae artist)DEA reggae band(REN)DUBLOVE reggae bandKMAintl.reggae artists,Rob Dread intl. reggae artist(REN)King Street(featuring members of Soulfly,Skrape/Nothingface )CroneCut Love Kill(Five Finger Death Punch bassist Chris KaelAlbert Oberst III…. and has been featured on many recordings both as a session player and/or writer.