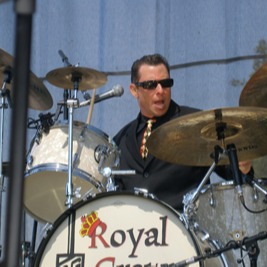 [su_expand]Daniel Glass is one of today's foremost authorities on classic American drumming. Since 1994, he has toured all over the world with the pioneering "retro-swing" group Royal Crown Revue, and recorded and performed with a host of top flight artist like Brian Setzer, Gene Simmons, Bette Midler, Liza Minnelli and Mike Ness from Social Distortion. He has been voted one of the top five R&amp;B drummers in the world two years in a row by the readers of Modern Drummer and DRUM magazine. Daniel is also an award-winning author and clinician. He has written three books, including The Commandments of Early Rhythm and Blues Drumming (with Zoro), and has performed at prestigious international festivals like PASIC and the 2010 Modern Drummer Festival. Daniel's clinics focus on the evolution of the drum set. Using dazzling chops and high energy showmanship, Daniel takes audiences on a whirlwind journey that covers seven decades of groove. His goal? To convince you that the best way to play today's grooves - Rock, Pop, Blues, Funk, Hip Hop, Reggae, Gospel, etc - is to understand the roots from which they grew.[/su_expand]