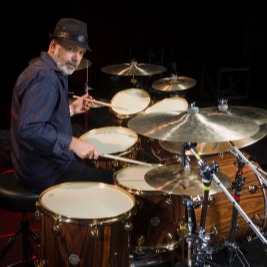 In 1967, Danny Seraphine was one of the architects of the band ‘Chicago Transit Authority’, soon after known simply as ‘Chicago’. As the original drummer for the group, Danny performed and contributed his songwriting talents for over twenty-two years until he was abruptly dismissed in 1990. During his tenure, ‘Chicago’ was the leading singles-charting group of the 1970’s. Collectively, the band generated sales over 130 million units in the U.S., with 22 gold, 18 platinum, and 8 multi-platinum albums. During the course of their career, they charted five No. 1 albums and 21 top ten hits. Chicago is historically one of the longest-running and most successful U.S. pop/rock and roll groups, second only to the Beach Boys in terms of singles and albums. Danny has been recognized as one of the world's most highly-respected and influential jazz-rock/rock drummers of all-time. Not only was he rated by the legendary Buddy Rich as one of his favorite young drummers, but Danny also earned a rank on Rolling Stone’s “All-time Top 100 Drummers”. Following his departure from ‘Chicago’, he went on to produce recording artists, Broadway and off-Broadway shows, and an independent movie and soundtrack. In 2006, he formed his new band CTA (California Transit Authority) which he continues to tour and record with today while carrying on the jazz/rock legacy Chicago Transit Authority started in 1969. Danny recently received the “Lifetime Achievement Award” at the Cape Breton Drum Festival and was recognized for “Songwriting of the Year” in respect of his songwriting contributions as a co-writer for Pitbull’s “I Know You Want Me” by ASCAP (American Society of Composers, Authors, and Publishers) during the 27th Annual ASCAP Pop Music Awards