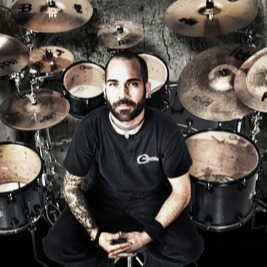 Achieved a notable reputation as one of the most versatile session drummers in extreme and heavy music today. Most known for work with Progressive Metal band Intronaut, but has an extensive history of working with many other groups in the Metal sub-genres. Every project that Danny Walker touches is elevated by his performance – whether it’s his day-job in Intronaut, his session work with Job For A Cowboy, Exhumed, Phobia, Cephalic Carnage, Jesu, Murder Construct or stint alongside his Intronaut bandmates and Ben Sharp in Cloudkicker. Walker has been cited in Rhythm Magazine’s “The 20 Best Prog Drummers Of The Millenium” Metal Sucks “The Top 25 Modern metal Drummers” OC Weekly’s “The 10 Best metal Drummers” and Modern Drummer Magazine’s “Gearing Up.”Danny Walker was born in Santa Monica, CA, December 25th 1981, raised by a musical family in the suburbs of Camarillo, CA. His exposure to drumming began by banging on pots and pans as a toddler. Eventually, graduating to a professional kit by the age of 8. Self taught, but eventually took drum lessons and studied a variety of styles ranging from rock and funk to Latin and jazz.First earned respect as a drummer playing in bands throughout Southern California’s Ventura County. Played with Uphill Battle, a hardcore/grind band from 1998-2004. They toured North America, Canada and released three albums.In 2002, joined avant-garde death rock band Cinema Strange for four years. The band toured broadly through North America, Europe, Japan and Mexico also releasing two records.2003 Simultaneously, filled in often for death metal group Exhumed and toured North America, Canada, Europe, Japan, and Australia supporting their “Anatomy Is Destiny” record.By 2005, moved to Los Angeles and had parted ways with main group Uphill Battle to pursue progressive metal group Intronaut. The group’s sound was a fresh direction for me and a great vehicle for establishing versatility as a player. This experience provided an opportunity to work on groove, dabble in odd meters and polyrhythms.Also in 2005 Teamed up with Orange County`s grindcore group Phobia and toured with them throughout North America and Mexico. Appearing on the albums “Cruel” &amp; “22 Random Acts of violence.” Among these were a handful of EP’s and split records.In March of 2007, teamed up with Justin K Broadrick (ex-Godflesh, Napalm Death, Head Of David), and UK based group Jesu for their debut North American appearance, I temporarily filled in for Ted Parsons (ex-Prong, Swans, and Godflesh.) Jesu also made their South by Southwest debut as part of a Hydra Head records showcase during this tour.In 2008, teamed up with long time collaborator and friend Leon Del Muerte (ex –Impaled, Exhumed) to put together death/grind group Murder Construct, featuring members of Exhumed, Impaled, Cattle Decapitation, Phobia, Uphill Battle, Bad Acid Trip, and Watch Me Burn. This California based group signed to Relapse Records and released a self titled ep and full length record entitled “Results”.By the end of 2008, temporarily joined progressive hardcore group Bastard Noise, featuring bassist extraordinaire Eric Wood (ex- Man Is The Bastard, Neandertahl.) Completed a two-week tour of Japan with the group and appeared on the album “The Red List” in the beginning of 2009. During this time frame, also worked with psychedelic metal group Bad Acid Trip and performed on the group’s “Humanly Possible” album.In the later part of 2010, re-joined forces with death metal group Exhumed to collaborate on a new record entitled “All, Guts, No Glory”. After the group’s long hiatus, a carefully crafted line up was assembled and has since then fulfilled drum duties in the studio and a handful of live performances.In 2012 Not only did Intronaut get the opportunity to tour with Tool, but Walker was invited up on stage every night to drum battle Danny Carey and perform the song “Lateralus” with the whole group. Another hi-light in 2012 was Danny’s performance with Legendary metal group Death on their Tribute &amp; reunion tour “Death To All.”2014 Death Metal group Job For A Cowboy enlisted Walker to fill in as a studio drummer on the album “Sun Eater.” Recorded with Jason Suecof at Audio Hammer.October 2014 Filled in for death metal group Cephalic Carnage, performing at the Hell &amp; Heaven Festival in Mexico City. Headliner’s included Kiss &amp; Rob Zombie.