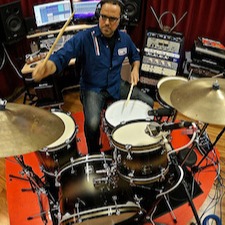 Dylan Wissing is a live and studio drummer based in Hoboken, New Jersey. A native of Bloomington, Indiana, he was inspired early on by his great-grandfather, a drummer and songwriter active during the Vaudeville and Swing eras, as well as by studio gurus Kenny Aronoff and Shawn Pelton (both based in Bloomington for a time). After a wide range of experience in jazz, salsa, and rock, Dylan toured for thirteen years throughout the US as a founding member of ska/funk road dogs Johnny Socko. Relocating to NYC in 2003, Dylan has built a successful recording career with artists such as Alicia Keys, John Legend, Drake, Kanye West, Jay Z, Eminem, NEEDTOBREATHE, Fabulous and Rick Ross. His drumming appears in commercials for companies such as AT&amp;T, Citi Bank, Valvoline, Behr Paints and Banana Republic. He’s a published author for Modern Drummer Magazine and MD Reader’s Poll nominee (Studio). Dylan records, produces and create videos from his own Triple Colossal Studios, located in an historic leather factory in Hoboken.