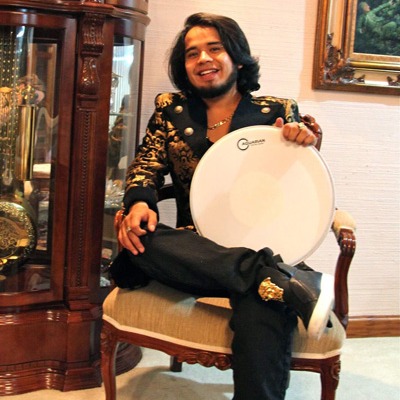 Erick Eugenio Sánchez Tovar(Born March 20, 1991 in Nueva Rosita Coahuila MEXICO) is a versatile musician with a specialty in cumbia, percussionist, singer and producer, known by his stage name EL MASSORE, Its artistic name comes from the Arabic word massore that means Money.Erick Eugenio Sánchez Tovar. "The massore"He was born in the city of Nueva Rosita Coahuila Mexico, with descendants of musicians, by his maternal grandfather Mr. Raúl Tovar Cantu, a musician who belonged to the famous Carta Blanca. Erick started his group at the age of 5, supported by his parents, as they saw in the much talent, started playing the guiro. At the age of 8 years he became the vocalist, Timbalero and image directing the group. Although he was enrolled in a school, after many unjustified absences Erick had to drop his studies at a very young age, at age 12, in order to work putting his health, safety and morality at risk, affecting his personal development And emotional, to get the group and its family forward.In the beginning, his group was constituted by several members, but it is possible to mention that his 2 brothers had the opportunity to participate in the bass and in him keyboard, Currently there is no member of the early years, musicians have been replaced. Erick and his group Massore became popular in the year 2000, with just 8 years of age with his album EL BAILE DEL GORILA, his next album EL PÁJARO LOCO, and the single EL POLO BEAR, which were a great success. Erick gained more popularity, highlighting his own style led his group to a general recognition. In total, including his gorilla dancing discs and crazy bird, he has 13 albums that are The Dance of the Gorilla 2001, The Crazy Bird 2002, The Flying Cat 2003, with more eggs 2005, free and crazy 2006, the cumbia reggetona 2007 , Cumbia cusinela 2008, mixed cumbia 2010, bear dance 2011, angry birds 2012, the battle has begun 2014, machin rin 2015. His style of music is characterized by being multiple, He has collaborations with AB Quintanilla, Aniceto Molina, Reyes Locos, etc. He is considered the only Mexican cumbia artist who has been able to enter and have the approval and acceptance with the Texans.He has appeared as a star in boom events as in the awards ceremony TEJANO MUSIC AWARDS, TEXAS AWARDS, GIANT SATURDAY WITH DON FRANCISCO CADENA UNIVISIÓN, AL RED LIVE WITH MARÍA CELESTE IN TELEMUNDO, DESPIERTA AMERICA FOR UNIVISION, VIVA TEJANO FOR TV AZTECA , SHOW OF JONNY CANALES BY AZTECA AMERICA, FESTIVAL OF THE FLOWER of Selena and the Dinos in Christian corpus. Nowadays, it is used as a soundtrack for the SABADAZO program, its simple EL OSO POLAR, a success that is still in effect since 2002. He has also had collaborations in the production for other groups like Spring set, Kumbia Kings, The Duel, Jay Perez, Man, Aniceto Molina, The red light of San Marcos, among others.