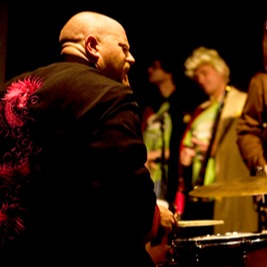 Imagine getting up in front of a live crowd with your favorite musical kindred spirits and winging it musically for an hour and a half? A funky sonic tsunami born out of creative adventurous, Evan Stone and the Translucent Ham Sandwich Band have done just that for several years on the southern California club circuit, wowing audiences with their Psychedelic/Funk/Rock/Prog/Avant Garde/Jazz musical musings and Andy Warhol's Exploding Plastic Inevitable visuals. It's a genre meshing extravaganza of experimental shenanigans that has no immediate comparison.Now Stone is poised to unleash their squawky perambulations and angst filled ruminations to the world. Their debut album, Music From The Future, features 21 fully realized tracks sure to raise eyebrows and have jaws hitting the floor. Expansive and discursive, the listener is quite likely to wonder what is going on here musically in the world of The Translucent Ham Sandwich Band, but that's Stone's ultimate goal. Equal parts jam and improv, (think Ornette Coleman playing with Captain Beefhart's Magic Band), the record opens by establishing a palpable sense of uneasiness (flies buzzing, dogs barking, phones ringing, radio static) that permeates this sometimes abrasively bizarre, decidedly discordant and challenging musical schematic. Stone's timely social commentary and razor sharp observations, sometimes resembling psychotic rants, weave in and out of the entire presentation, with enough guffaws and slam style poetry along the way to be worth the price of admission.One of the benefits of being a coveted session drummer is that Evan Stone was bound to create a vast network of connections, touring the globe and recording with artists such as Toni Childs, Aly and AJ, Maynard Ferguson, and Greg Adams Band (Tower of Power), just to name a few. When it came time to put together the Translucent Ham Sandwich Band, he had a deep well to pull from. The veritable list of top shelf musicians to join Stone on this wildly organic musical roller coaster ride is impressive, and the songs were honed over many weeks of playing shows that resembled circuses to a sometimes stunned, but always appreciative audience.Though the record was created in pieces (music first, horns second and vocals and poetry third), ‘Music From The Future’ sounds remarkably more well planned out than originally conceived. Stone, always affable despite his need to remain the titular leader, changed or omitted very little in the final mixing process, keeping the earthy, organic nature of the songs considerably intact. Organized into Side 1 and Side 2, ‘Music From The Future’ also includes a trippy, otherworldly video on their website to watch in tandem, giving the listener the full, mind expanding multimedia experience.On songs like ""Censor Me"", ""Change"" and ""Occupy"", Stone cuts loose in bombastic, even caustic musical directions that grip you like a vice, and don't let go, while lyrically Stone is fervent is his quest for truth and wisdom. A modern day individualist/impresario, Stone is a courageous trailblazer and unafraid to wear his earnestness on his sleeve and be passionately unapologetic in his approach. THSB is musical freedom in its purest, most unadulterated form. -Andy Gesner