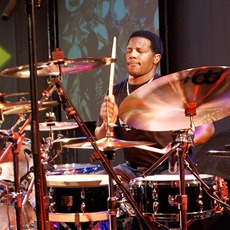 Felix ‘D-Kat’ Pollard a drummer whose propulsive style and versatility have enabled him to play alongside some of the greatest musicians in the world. His roster includes Lionel Richie, Anastacia, Shelia E., George Duke, Chaka Kahn, The Staple Singers, Jessica Simpson, Brian Culbertson, Phil Upchurch, Clay Aikens and a host of others. There is no doubt that Felix is one of the most sought after percussionists in the music industry.A versatile drummer, Felix is impossible to pigeonhole as just a specialist in one or two areas. His versatility allows him to play everything from pop to jazz to gospel and rock. Weather Buddy Guy or Destiny’s Child, his talent is recognized by the best in the business. It’s this talent that landed him his current position as a drummer touring with Taylor Hicks, the 2006 American Idol winner.Felix is not only a drummer extraordinaire he’s also an extraordinary person. His talents were obvious at an early age. From the time he was two he was banging away on anything in sight.At the age of 10 he began to play on a Ludwig drum kit and made his professional debut in the gospel choir ‘Voices of Deliverance’. Even though his roots are found in gospel and Jazz, he has performed for a wide range of audiences including the Chicago Symphony Orchestra and Savion Glover’s ‘Bring Da Noise, Bring Da Funk’.Felix’s notable TV appearances include the HBO special Midnight Mac, with Bernie Mac, The Jay Leno Show, Late Night with David Letterman; he has even performed for the former first lady Hillary Rodman Clinton at the 1996 Democratic National Convention.Felix aspires to continue his journey into song writing and fronting his own band. “I want to continue to work and perform with the best musician, and make everyone around me feel good about what I bring to the music industry as a true musician”.When not playing music, Felix studies ASL (American Sign Language). He also enjoys cooking, Jet Skiing, snowboarding and spending time with his son Dillon.Anyone who is fortunate enough to meet and listen to his music quickly learns that Felix is one bad Kat.