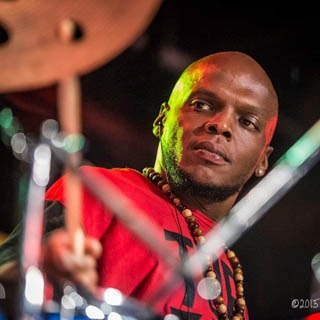 Before being fully capable of reaching a foot pedal, Freddy’s passion for the drums was evident! While his mother, Patricia Spencer, played the organ at church every Sunday morning, he could be found staring at and mimicking every move the drummers made. After seeing the flame ignite, his parents bought him his first set of drums at the age of 2. By the age of 8, he became the main drummer for his church and was able to fully read music by the age of 10. Freddy’s growing enthusiasm encouraged him to fine-tune his talent, through constant practice, and to begin the pursuit towards becoming a renowned drummer!During his high school years, Freddy was the recipient of several District and State honors/awards. Once he graduated, he went on to study jazz at Southern Illinois University-Edwardsville under master pianist Professor Reggie Thomas. It was in that environment that Freddy’s music vocabulary increased in ways he never imagined and he became determined to establish his own career in music.Freddy has been playing professionally for over 15 years now, and has become one of the most sought after drummers around. He’s recorded with many local groups and has performed with many artists such as Randy Brecker, Theo Peoples, Ron Isley, Tweet, Rahsaan Patterson, Keke Wyatt, Keke Sheard, Eric Roberson, Angela Winbush, N’dami, Amber Bullock, Julie Dexter, Tim Rogers and the Fellas, Duranice Pace and Denise Thimes just to name a few. Currently, Freddy is touring with the Anthony Gomes Band, and endorses Pearl Drums, Bosphorus Cymbals, Agner Drumsticks, Aquarian Drumheads, Humes &amp; Berg Bags/Cases, KickPort International, Big Fat Snare Drum, DrumDial, Cympad and Tru Tuner. Stay tuned!