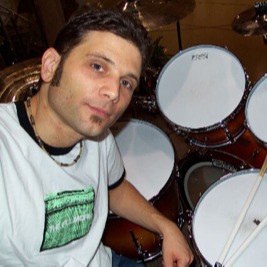 George Saccal has worked in the music industry as a performer, session drummer, instructor, vocalist and arranger. George began his studies at the age of eight years old. When George was just thirteen, his teacher informed his Father, “I’ve taught him everything I know, he is teaching me now”. George continued to expand his musical knowledge by exposing himself to many different genres of music. By the age of fifteen, George was performing with local professional bands. Through much practice, dedication, and perseverance, George continued to pursue his lifelong dream of working as a professional touring/recording artist.Unaware that thirty-five drummers had auditioned in front of him, George accepted an audition from the Latin-rock band “deSoL”. The unwavering meter and dynamic grooves that George brought were unique attributes that deSoL was looking for to take them to their next level. George was hired by the band, and subsequently signed with Nashville-based Curb Records. Throughout his career, George has also worked with Warner Music Group, RCA, and Reprise. His creative drumming technique earned him a Billboard Award for deSoL’s unique recording of “Little Drummer Boy”. During his career, George has played venues with capacities of up to 25,000 people. Some career highlights include sharing the stage with; R.E.M., Blues Traveler, Cypress Hill, and The Legendary Wailers. George has played at Lollapalooza, and at a “Jets vs. Dolphins halftime show” in Miami. During his time with deSoL, the band performed on NBC and FOX network morning shows across the country. With deSoL, George advanced in his abilities as a recording artist by working with accomplished producers Michael Lloyd, Franke Previte (Dirty Dancing), and Rick Iantosca (Kool &amp; The Gang).George has earned the required credentials to vote and participate in the Grammy Awards process, and serve on the Philadelphia Chapter Board of Governors with “The Recording Academy”. Currently, George is a member of “Abundant Grace”, a vibrant contemporary Christian praise and worship ministry. Thankful to use his God-given talent, combined with his lifelong commitment to growing in the art of music, George Saccal continues to be an accomplished, pursued, and highly respected artist.