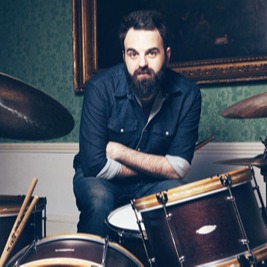 Graham Hopkins is a renowned Irish drummer. He is one of Ireland's most in demand drummers.He was surrounded by music from an early age and began playing the drums around the time he was 4 or 5 years old. His father Des Hopkins is a respected jazz drummer.Graham left school to join Irish rock band My Little Funhouse in 1993. After releasing their debut album the band toured heavily supporting such bands as Guns N' Roses and The Ramones amongst others. Graham then lived in LA for 2 years and recorded a second album for Geffen before the band imploding.He was then invited to join popular Northern Irish punk-rock band Therapy? in 1996. Graham recorded 3 albums and released a greatest hits album with the band, and touring non-stop while Graham was in the band. Therapy? sold over 2 million albums worldwide.Feeling uninspired by the musical direction of Therapy?, Graham left the band in January 2002 and was immediately asked to tour with Irish singer/songwriter Gemma Hayes. After touring with Gemma Hayes for over a year - supporting her Mercury Music Prize album Night On My Side - Graham went on to record two albums with his own band Halite. He played all the instruments with Halite and fronted the band live. Halite played lots of shows over the following two years including opening Slane Castle with the Red Hot Chili Peppers and Foo Fighters.Graham plays clinics and in 2003 organised the biggest clinic / workshop / drum spectacular that has ever taken place in Ireland, if not the world!! Over 2000 people turned up to see Graham play alongside Chad Smith, Taylor Hawkins, Joey Castillo, Mark Richardson and a host of other drummers. All money raised went to charity. He appeared as part of the band on the popular 2006 Oxfam charity album, The Cake Sale. Graham was also member of Dublin hard rock band Boss Volenti, and played on their debut album released in 2006. Hopkins spent the early part of 2007 stepping in as drummer for Snow Patrol on their European, Australian, New Zealand and American tours. He also toured worldwide with Dolores O'Riordan for the release of her solo album Are You Listening? in 2007, which he played on.Graham also played on the soundtrack to the Irish Oscar winning musical 'Once'. He drummed on a few of the songs with Glen Hansard of The Frames and Marketa Irglova.The Swell Season which features Glen Hansard, Marketa Irglova and members of The Frames have been touring non-stop since the 2008 headlinging allover the globe from Sydney Opera House, and Hollywood Bowl to the Royal Albert Hall. He is currently touring globally with Glen Hansard on his debut solo album 'Rhythm and Repose'. Graham has always been kept busy drumming on numerous albums, both Irish and internationally. He has played drums on albums, and live, with many artists.Recorded and played live with a variety of different artists including Therapy?, The Frames, The Swell Season, Glen Hansard, Halite, Gemma Hayes, My Little Funhouse, David Kitt, Mundy, The Reindeer Section, Alphastates, Autamata, Ann Scott, Josh Ritter, Colm Mac Con Iomaire, Mark Geary, Jape, Q, Colm Quearney, Square Pegs, Ollie Cole, The Pale, Pugwash, Jerry Fish, An Emotional Fish, Lisa Hannigan, Miriam Ingram, Paula Toledo, Ferghal McKee (Whipping Boy), Richard Cocciante, Andrew Strong, Fionn Regan, Lir, The Cake Sale, Dolores O’Riordan (The Cranberries), Snow Patrol, Bronagh Gallagher, Boss Volenti, Duckworth Lewis Method, Neil Hannon (Divine Comedy), The Walls, Spectrum, Conor Deasy (The Thrills), Nina Hynes, Rhiannon Giddens, Joe Henry, Caitriona O'Leary, Tom Jones, Rosanne Cash amongst many more.