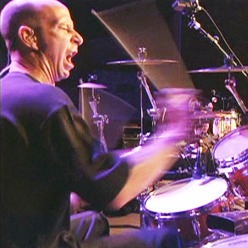 Joe is a highly sought after drummer/percussionist whose versatile style and dedication to his instrument has earned him world tours, countless recording sessions and tracks on major motion pictures and television shows. His professionalism and groove have made him a welcome addition to any band's rhythm section. Joe’s product knowledge, playing skills and great attitude are the reason he is an endorser and clinician for major drum companies. He has released 5 solo CD’s. “Joe Morris and Friends” (stereo) which had 6 six songs chart in the top 10 under jazz. “Joe Morris and Friends” (5.1 DTS Surround Sound) thereby making Joe the first drummer to put out a solo CD in 5.1 Surround Sound. Additionally, this CD was used by Genelec for demo purposes at trade shows all over the United States and Europe. It received rave reviews. “Groove Therapy” is Joe’s dual release with bass player extraordinaire Ray Riendeau. This CD is just pumping bass and drums and really shows what can be done within a rhythm section. “Arrhythmia” This music is rhythmically complex, harmonically ambiguous and predominantly instrumental crypto-funk. His newest release ""One Beat Off"" has something for everyone from Funk, Latin, Odd time, Duet Drum Solo's, hard rock and even some speed metal. All instrumental music lovers should own this CD, The grooves are thick and at times there are chops flying everywhere. Over all a great musical journey and some of Joe's best work to date. As a member of the Esteban Band, Joe is touring the world playing to sold out venues all over the country plus playing live TV appearances as the band hits the Billboard charts on a monthly basis. Joe has recorded over 17 Esteban CD’s and produced the “Esteban Live” CD that went number 2 on Billboard. Additionally, he is on the “Intimate Evening with Esteban” video, The ""Esteban Live at Red Rocks"" DVD and the ""Esteban and Friends"" DVD which hit number 1 on the Billboard charts. Joe is also a clinician for major drum manufacturers, and the music director at the Conservatory of Recording Arts and Sciences. He has performed in clinics all over the world. Joe Morris was chosen by The Fender Music Corporation to be the drummer on the Fender Stage at the 2002 Namm Show. Joe played with tons of different artists including: Greg Koch, Ray Riendeau, Gary Hoey, Kim Stone and Reggie Hamilton. He was also included in the Fender Clinic Tour featuring guitarist Greg Koch and bassist Ray Riendeau. When the clinic tour ended the band was invited to Steve Vai's Studio to record a CD. ""Radio Free Gristle"" is out on Favored Nations Records which is Steve Vai's label. Joe was featured on a track on the “Lords of the Bass"" CD along with Dave Weckl and had the pleasure of playing Bass Day in New York with Ray Riendeau, Victor Wooten, Christian McBride, Matthew Garrison and T.M. Stevens.JOE MORRIS AND FRIENDS/JOE MORRISJOE MORRIS AND FRIENDS DTSARRYTHMIAGROOVE THERAPYENLIGHTENMENT RAY RIENDEAURADIO FREE GRISTLE STEVE VAIENTER THE HEARTESTEBAN LIVE IN SEDONAESTEBAN LIVEAT HOME WITH ESTEBANONE BEAT OFFWESTERN COUNTRY RON KEELBASS TALK 7 RAY RIENDEAUSPIRITS OF THE WESTPROGRESS AVENUE LARRY GASTFALLEN WORLDWHAT A DAY TO BEGINBREAKING OUTBOX OF PUPPIES TIM AND WILLY KNIX RADIOMORE OF YOU BRIAN SITESALL MY LOVEBACK TO BACKBEST OF ESTEBANWEAR THE BLACKWHAT CHILD IS THISDUENDEHEART OF GOLDJOY TO THE WORLDPASSIONESTEBAN BY REQUESTFLAMENCO Y ROSESSONGS FROM MY HEARTHAPPY HOLIDAYS WITH LOVEAN EVENING WITH ESTEBANFIRST WORLD REFUGEEMAGIC MOMENTSPAUL COTTON FIREBIRDTOM BOOTHBREAKING OUT AND I AMROCK FEST T-WOODYFLAME AND FLAMENCOMERRY ARIZONAFIVE FACES GRAHAM BRIMHALLALL FUNKED UPSISTER TORIESTEBAN LIVE IN SEDONA (DVD)AN INTIMATE EVENING WITH ESTEBAN (DVD)IONE ANGELES HEAR THIS KISSFATHER DAUGHTERCHALLENGE YOUR SENSES TAYE DRUMMERSMAN WITHOUT EYES SAMOUS THEORYLEARN FROM CHILDREN PEDJAESTEBAN LIVE AT RED ROCKSESTEBAN LIVE AT RED ROCKS (DVD)THE BEST OF ESTEBAN ESTEBANFIREBIRD DTSTHEN AND NOWCROSSROADS CHUCK E BABY AND FRIENDS