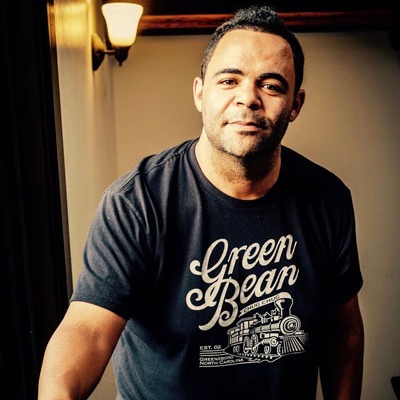 At the age of eight, Johnny taught himself to play the keyboard. When he was thirteen he was already participating on small local festivals getting awarded for several times.At sixteen, founded his first rock band called “Soyuz Blues”, in which he performed as a keyboard player; this band gave him the opportunity to share a lot of experiences with musicians that nowadays are recognized and important in Ecuador. Just a year after (at seventeen) he joined well known singer “Jinsop” as a keyboard player performing on tour all around the country.In 1996, he founded a metal progressive band called “Viuda Negra”. Johnny started as the keyboard player, then years later, switched to the bass guitar, but he has always been drawn to be at the drummer’s throne. As Viuda Negra’s drummer recorded “El Final del Silencio” and “La Voz de Los Bosques”.Later he became the drummer for one of the top-class guitar players in the country, “Hittar Cuesta” and recorded an instrumental album called “El Lenguaje de Los Espíritus”.In 2011, he joined the famous pop band “Esto Es Eso” in keyboards and also drums later on.Johnny has performed as guest musician for several artists from different genres like “Los Terrícolas” (Venezuela), “Hermanos Arriagada” (Chile) and performer and comedian “Julio Sabala” (Dominican Republic), to name a few.In 2012, became drummer for one of the most important rock bands in Ecuador “Anima Inside” (2012 to 2017) until he decided to leave the band and pursuit personal music projects and a career of drum clinics.In the current year he’s been able to work on some personal music projects and at the same time participating in drum events like “Batafest 2017” in wich he was the main performer.Johnny Gordon, a multi-gifted person who has built his name in the music industry as an empirical and self-taught musician in various instruments and genres, allowing him to own an extensive background of musical knowledge. He enjoys musical variety, although his main influences come from progressive, classical and instrumental bands. Nowadays as an independent drummer he began touring the most prestigious high schools and colleges giving drum shows and clinics.Another upcoming project of his is to release a web channel (YouTube) to reach drummers with his knowledge and experience all around the world.