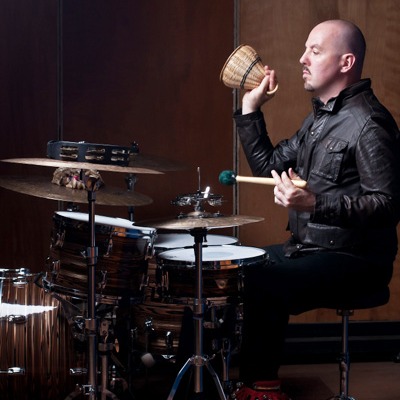 Michael studied jazz and world music at the University of N. Texas. He networked quickly and began playing frequently around the Dallas and Fort Worth metroplex, eventually landing a spot with The University, Grammy nominated One O'Clock Jazz Band, A spot he held for two years and recorded two albums with the ensemble, Lab 97 and 98.After school, Michael relocated to Austin, TX, At that time the Central Texas music scene was booming and Michael found work with the cities top players and groups, (Bob Schneider, The Groove Line Horns, Toni Price, Papa Mali and Vallejo) After 3 years in Austin, Michael wanted more and set his sites on returning to Los Angeles.In 2001, Michael joined LA based African singer, Ricardo Lemvo's band, Makina Loca. After a couple of tours in the states and getting his name planted in the scene, Michael got asked to fill the drum seat for the seminal LA latin band Ozomatli, This proved a fruitful partnership. Michael embarked on several tours with the band nationally and internationally for two years, promoting the bands album "Street Signs" which had won two Grammy awards. This fueled Michael career and opened doors to Latin America. In 2005, Michael was ask to join the legendary mexican troubadour, Joan Sebastian band, This was a great opportunity to show folks his double threat potential, as a latin percussionist and a drummer. Michael bounced back and fourth between both chairs for 6 years, during which time he won a grammy with the singer and was able to performed and record with a plethora of singers from Latin America.In 2011 Michael came back stateside and was presented with an amazing opportunity to combined both his percussion and drum set skill into one musical experience, The group, Bitter:Sweet. They came calling and were riding high on the release of their first album, The Mating Game. Michael would worked with the group live during this period and much more on the sophomore effort from the band called, Drama.Also at the top of 2011, Michael along with 9 other talented LA based musician formed Jungle Fire, an instrumental tropifunk group working on the fringes of the Latin-Alt sound., Three percussionist front this group along with 3 horns, two guitars, bass and drums, with Michael holding down the Timbale chair most of the time.Juno Records (UK) accurately sum up the Jungle Fire live show experience: "Few bands live up to their name in the way Jungle Fire do...each Jungle Fire song blazes the floor with real power".The band currently has two full length records on Nacional records, Tropicoso (2013) and Jambu (2017) and also several 45's on Colemine records.Currently, Michael has also embarked into leading his own band: The White Blinds, a high powered soul jazz organ trio,The idea of service has always been central in Michael's approach and has kept him busy working with his bands and freelancing with artists like: Egadz, Orgone, Donavon Frankenreiter, Nikka Costa, Freddie and Francine, William H. Macy and La Santa Cecilia&nbsp;