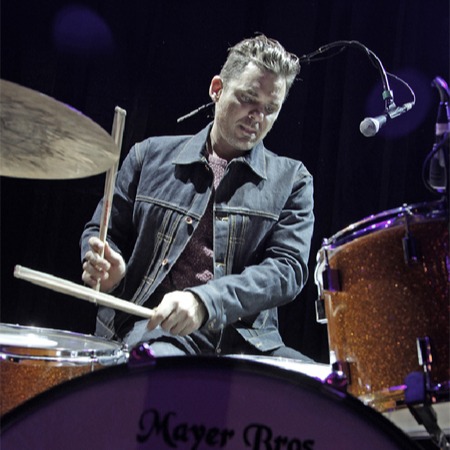 Miley began drumming when he was 4 years old. His dad played him "In the Air Tonight" by Phil Collins and after the classic drum fill, Michael knew right then and there what the future would hold for him. Then of course after he had heard "Hold the Line" by Toto and "Good Times, Bad Times" by Led Zeppelin, he began his pursuit for developing a fast right foot. Jeff Porcaro and John Bonham remain his top favorite drummers. However, being born on the same day as Keith Moon (August 23rd), Michael, with the Rival Sons (Earache Records), has ironically established a style of his own that echos the reckless abandonment of "Moonie" (now "Miley"). He has recorded and/or performed with Kelly Clarkson, Jay Buchanan, Joe Firstman, Bird3, Josh Kelley, Santana, Ricky Martin, Tony Lucca, Veruca Salt, Mickey Hart, and Rival Sons. He also was in the House Band for "Last Call with Carson Daly" on NBC for five years. He is currently the drummer for Rival Sons on Earache Records. They have three LP's and one EP available on iTunes and in stores everywhere. They're about to record their fourth full length album in Nashville with Dave Cobb.Michael has studied with Roy Burns, Dave Garibaldi, John Molo, Chalo Eduardo, Chuck Silverman, Chuck Flores, and Dean Cook.