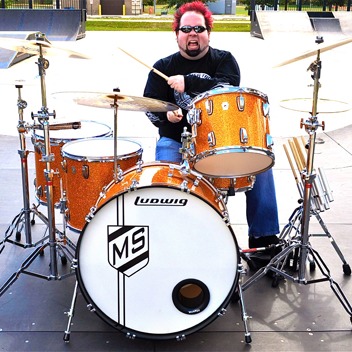 Mike Semerau (Independent/Educator/Clinician/Session drummer) born March 24th, 1975 on the Northside of Chicago, IL.  Mike started his drumming career at age 4. Mike has been teaching thousands of drummers since 1995 and personally continues to do at his drum school in the midwest called Chicago's #1 Drum Lessons. Chicago’s # 1 Drum Lessons houses about 300+ students taught weekly between Mike and four of his top drum students in seven different studios throughout the Chicagoland area and suburbs, Mike’s personal weekly schedule has 120 students currently. Mike appeared on The Drum Channel on 12/3/2011 and was interviewed by one of his drum idols and world renown drummer Terry Bozzio. Mike has become an acclaimed drummer as well as an endorsed artist for Ludwig drums, Promark Sicks, Zildjian Cymbals, Aquarian drum heads, SKB cases, Prentice Practice Pads, Power Wrist Builders (weighted sticks), Trick drums quick releases, Wornstar clothing, Max Heads (custom bass drum decals), and a stick and cup holder company Qwik Stix. Mike does annual drum clinics at local Guitar Centers, Sam Ash, and drum shows, as well as constant session work in and out of the recording studios. He has been featured on numerous local news stations for his unique and superb video teaching method where students learn the drums fast, efficiently, and the most effective way to practice their drum lessons. Students get the one on one in person instruction, then goes home with a well planned out professionally recorded DVD of video segments of what they learned that week to help aid them throughout the week in their practicing. Mike participates in numerous public events such as Day camps, Chicago Vintage Drum Show, festivals, parades, and other community functions to get the word out. Mike constantly stretches the goals and limits on offering the best in person drum instruction around for the best price.