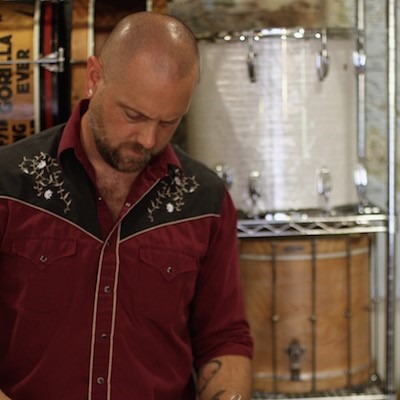 Norm Bergeron is from Sanford, Maine, a small working class town that, a couple of generations before, was the childhood home of Vic Firth. Norm was a born sound dabbler and conduit of rhythmic ideas. His most vivid early childhood memory is of sitting between the washer and dryer in his parent’s basement matching pitch with the one and tapping out the inherent rhythm of the other. An All State orchestral percussionist and All State big band drummer, he suffered from Big-fish-little-pond syndrome as a teen. Norm was cured immediately upon arrival at the University of North Texas and his life was forever changed by the culture of camaraderie, the institutional expectations, and the self induced expectations that came from being surrounded by some of the finest musicians in the world at such a pivotal moment in his life.While at UNT, Norm completed a BA in Jazz Performance and was a long standing member of the One O’clock lab band as the percussionist. During his tenure he had the good fortune to record numerous albums and travel all over the world. He stayed at UNT to complete an MS in Interdisciplinary Studies with emphasis in Ethnomusicology, Anthropology, and Documentary Film and was the instructor of the Afro-Cuban, Afro-Brazilian, West African, and Gamelan ensembles.Since 2011, Norm has served as Director of Percussion Studies at Temple College in Temple, Texas. In addition, he maintains an active private lesson studio at his home in Austin and is a stalwart performer in the “Live Music Capital of the World”.Norm has performed live and/or in the studio with numerous artists including: Shara Worden (My Brightest Diamond), Zappa Records Artist Holland Greco, Tim Miller, Joe McBride, Jeffrey Osborne, Grover Washington, Jr., Al Jarreau, Wayne Bergeron, Ernie Watts, Joey McIntyre, Brave Combo, Mingo Fishtrap, Sara Hickman, Steve Reich, Scrote, Big Cat and on numerous jingle and singer/songwriter sessions.Norm has used Vic Firth sticks and mallets for as long as he can remember and is a proud endorser of their products. Additionally, he endorses Aquarian Drumheads and is continually blown away by the quality of product and the pallet of sounds that they create.