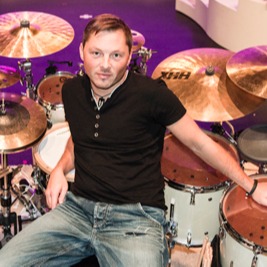 Patrick Metzger, born in Homburg/Germany is a skilled Drummer, Teacher and Clinician.He currently plays professionally in bands in his home country as well as the rest of Europe.Aside from playing, Patrick holds Workshops and Drumclinics and does drum coaching.Around the age of 4 and 5 he sat in front of his first drum set, that of his Father’s who was his first instructor. During school years he played in Schoolbands, Marching Bands and also some Local Coverbands.He grew up in the area of Ramstein where there is a big US airport which gave him the chance to meet and play with many American musicians. In September 2000 he began his studies in Drums and Percussion. He had the opportunity to study with some great teachers like Udo Dahmen, Claus Hessler, Dom Famularo, Jost Nickel, and many more. Also Masterclasses and private lessons with Jim Chapin, David Garibaldi, Jojo Mayer to name a few.In 2004 he went for an exchange to the Netherlands and visited the Jazz Conservatorium in Maastricht. While there he received lessons from Ron van Stratum, who is a well known Jazz and Latin Drummer from the Netherlands. In 2005 he went back to Germany and started at the Popacadamy in Mannheim, which is the first and most popular School of Popmusic in Germany. He finished in 2008 with a „Bachelor of Arts“. Paddy, as friends and colleagues like to call him, is currently living in Mannheim and founded his own School for Drum Coaching, called „DRUMSformers Drumschool“.Since 2013 Patrick plays for the German popsinger “Beatrice Egli” and is to be seen a lot on tour and on TV Shows.2014 he released his first Drum-Playalongbook and beginn to write monthly for the german Drummagazin “Sticks”. He contributes articles for the german „Offbeat“ Magazin and does Networking for „Percussion Creativ“, which is the German Brother of the P.A.S. in the USA.He contributes articles for the german DRUMHEADS Magazin and does Networking for the „Percussion Creativ“, which is the German Brother of the P.A.S. in the USA.