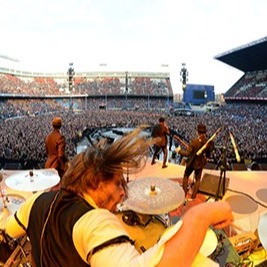 Like most drummers, the drums found Richard—he had no choice. He’s looked upon them with a fervent awe from as far back as he can remember. Keith Moon was the first drummer who caught his attention, inspiring him to write a letter asking if Keith would forgo destroying one of his kits for the evening and send it his way instead. The kit never came, but Richard continued to attract to the raw fiery passions of drummers such a John Bonham, Mitch Mitchell and Ginger Baker. Though he didn’t get his first kit until high school, he excelled very quickly once he did, landing his first professional studio paying gig at 15. He continued to play in working bands until he was 21, and then made the leap of faith to move to what was then the music capitol of the world: Los Angeles. It wasn’t long before Richard was touring internationally with Wishbone Ash guitarist Jamie Crompton, playing in Sunking with the likes of Bass legend Rudy Sarzo and Guitar great John 5, and later joining the Poorboys. After a hiatus to raise a family took precedence, Richard Danielson is now back in the game with Vintage Trouble. Commonly described as Otis Redding meets Led Zeppelin, this primitive soul/rock n roll band has been touring internationally for the better part of five years now, both headlining and opening for the likes of The Who, AC/DC, Bon Jovi, Brian May, Lenny Kravitz and The Rolling Stones just to name a few. They’ve recorded two records and one EP, and have recently signed to Blue Note Records under the helm of Don Was, who produced their latest record 1 Hopeful Rd.