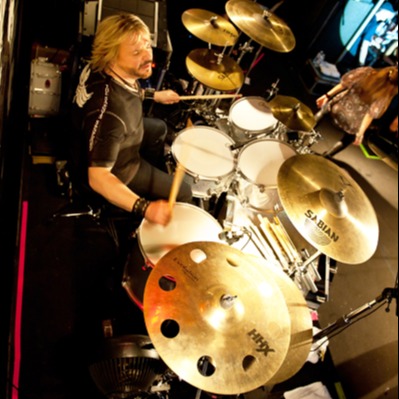 Arriving in Nashville TN via WI 9 years ago, Missouri native Rick Brothers had some very specific, if not lofty goals for himself. Some of these goals included; touring on a bus with a national artist, playing on a nationally released record, and of course being able to make a living playing drums and being considered one of the “A” players in Music City. Through perseverance, experience, and ability, Rick has achieved all of these goals and has set his sites on more.With a Bachelor’s degree in Music Education from the University of Missouri (Mizzou, where he recalls sitting by Sheryl Crow in numerous classes), Rick traveled the road for nearly 10 years in various regional acts. This took him all over the United States and abroad playing various venues, eventually ending up in Appleton WI. Most would consider his 10 years in WI a very successful time in his career. As an Appleton resident, he managed a pro drum shop, taught privately 30+ students weekly, and formed his own band Kidd Gloves. His drumming and vocal talents, along with some of the finest musicians in the state, made Kidd Gloves one of the most successful regional acts at that time. With local radio airplay and numerous sponsorships , “KG” was able to obtain opening act status for most major national artists performing in the area. While these were memorable times, Rick knew there was more to accomplish and made the move to Music City.After solidifying work with one of the world’s leading drum manufacturers, as well as gaining recognition for his live and session drumming in various local circles, Rick began to play every major local venue and fill in gigs with various national artists including Jo-El Sonnier, Rebecca Lynn Howard, Ty Herndon, Sarah Johns, and Doug Stone. He then received his first chance to record tracks for his first major national release. Rick recorded 4 tracks on Audium Records artist Doug Stone’s latest album, “The Long Way” including the album’s only single release along with the title cut. From there he was on his way later to travel 2 ½ years with Epic recording artist Ty Herndon, eventually landing bandleader responsibilities. With Ty’s touring schedule slowing down Rick found employment with Mapex USA as an inside sales and customer service representative. While employed there, Rick received one his most exciting calls to date… a chance to play for the “Redneck Woman!”Rick had the tremendous privilege to tour with the fastest rising country star in music history, Gretchen Wilson. In addition to being the hottest act in country music in 2004, Wilson gained recognition as recipient of the very prestigious CMA “Horizon” award and the AMA award for the “Breakthrough” artist in music in all genres, Rick enjoyed national television exposure with Wilson being featured on CBS’ 60 Minutes, numerous specials on CMT and performances on the RMA, CMA, and AMA award shows. Coming off the very successful 2004 Brooks and Dunn tour playing to sold out arena’s all over the country, Rick toured with Wilson and country artists Big &amp; Rich. With an Australian tour and an opening spot on Kenney Chesney’s 2005 tour, Rick was one of the busiest and more visible drummers on the national country scene.Currently Rick is touring and recording with another amazing new artist by the name of Colt Ford. Colt is taking the industry by storm with his fresh and new approach of country music. Combined with an "urban / rap" influence, his music is blurring the lines of hip hop and country. Compared to the likeness of Charlie Daniels and Kid Rock he is winning audiences over with his amazingly energetic live performances and unique approach to the genre. With sold out shows all over the country and touring with major acts such as Jason Aldean, Luke Bryan, and Larry the Cable Guy... Colt Ford is quickly becoming the "next" big thing in Nashville. Rick has just finished recording Colt's sophomore release "Chicken and Biscuits" due out in the spring of 2010, as well as his 3rd release ( name TBA) scheduled to be released in the fall of 2010. Rick can also be heard on Colt's live release "Live from Suwannee Jam" and the EP "Country Is As Country Does".Rick's success is truly an inspiration for all musicians, proving that if you don't give up and continue to dedicate yourself to your craft, anything can happen!