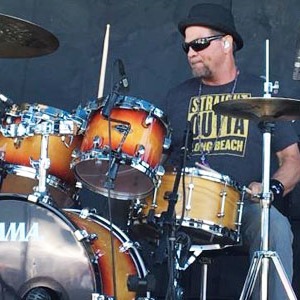 Rick Lewis has been one of the top radio personalities in the nation for many years. After a successful run in Los Angeles at legendary radio stations like KMET and Power 106, Rick has anchored the #1 radio show in Denver on KRFX. In addition to his success on the morning radio dial, Lewis also hosts an official Denver Broncos pre-game show on KRFX. Rick is a veteran of stand-up comedy, has done numerous TV shows and films, syndicated radio shows and plays drums in his new band the Rick Lewis Project. Rick Lewis founded the Groove Hawgs in 1998 and held down the groove for one of Denver's favorite bands. The Groove Hawgs shared the stage with many legendary bands and performers, The Who, Lynyrd Skynyrd, ZZ Top, Def Lepard, James Brown, the Allman Brothers, BB King, Steve Miller and many more. The Groove Hawgs were blessed with the opportunity to play Red Rocks, the finest outdoor amphitheatre in the world many times. They also played the final show at McNichols Arena with ZZ Top and opened for The Who at the Pepsi Center.In 2015 Rick formed his new band the Rick Lewis Project. With a diverse sound described as Colorado Groove and talented musicians, RLP has quickly become a fan favorite. RLP has played in front of 1000's of people and shared the stage with Vince Neil, Molly Hatchet, Jacob Dylan, G-Love, Zakk Wylde, Night Ranger and many more. Besides his many radio endorsements, Rick is proud to endorse Tama Drums, Sabian Cymbals, Vic Firth and Aquarian Drumheads.