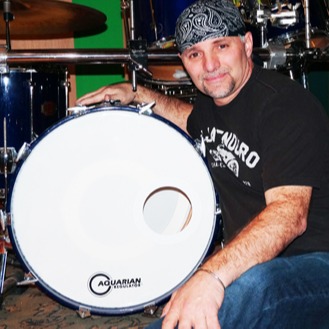 Roy started playing drums when he was 15 years old playing in local bands around Cornwall, On. Learning songs from his favorite Rush and Zeppelin records. Eventually learning to play guitar and sing just sort of came natural. That was 40 years ago. Since then Roy has performed in several rock Bands and tribute acts even had an invitation to audition for the Rock of Ages Musical.In 1982 he moved to Calgary and played through the mid 80s with the well known rock group Steeler. While in Calgary Roy received a diploma for recording and engineering from Columbia Academy of Recording Arts.After moving back to Cornwall, Roy has been playing exclusively with SamHill since 1993. For a 2 year stint some of the boys in SamHill became Raised On Radio, a tribute to Journey. Roy came out from behind the drums to be the lead vocalist and frontman with his uncanny vocal impersonation of Journey’s Steve Perry. SamHill still did many Journey tunes which shows how talented Roy really is, not only can he sing but play incredibly intricate Journey style drum parts at the same time.This group was constantly working and performing across Ontario, Quebec and the USA. In 2006, SamHill was fortunate enough to act as the house band for the contestants of TVs Rockstar Supernova when they came to Canada to perform.Lately besides the new drumming job in April Wine, Roy is also the head engineer at Dreambuilder Studios, a Pro Tools HD3 studio. He has been working with up and coming talent, producing and engineering everything from heavy metal to Celtic.At the same time Roy has been writing and producing a solo CD.He is also working with the European rock group Frozen Rain, singing as well as playing drums on a new CD to be released in the future.Roy’s influences include John Bonham, Neil Peart, Steve Smith and Dean Castronovo