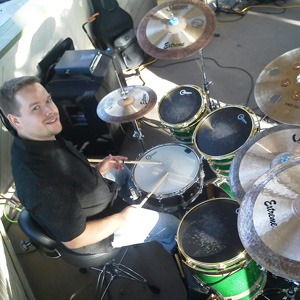 Sean ""The Hitman"" Sharp was born in Anaheim, CA., on May 14th 1981 to professional musician parents. Sean has been surrounded by & immersed in the art of the business of music ever since. Jaimoe (Legendary Drummer of the Allman Brothers Band) was at the hospital for Sean's birth and has been his Godfather and musical mentor to this day. After a family move from California to Mississippi, Sean decided to dig around in the family collection of musical equipment and found a set of white Ludwig drums. After beating on the Ludwigs for awhile, Sean begged and pleaded for a new drum set of his own. Quote: ""My father told me to join the drum corps at school to prove I was serious. If I did then i would earn a drum set of my own"". Sean tried out for 8th grade snare and was told to try the trombone. The band director said he would never be a drummer. Quote: ""I took it as a challenge and it lit a fire in me to prove him wrong. I taught myself a few rudiments and practiced all week. At the end of the week I demanded another tryout. I passed and a few months later was asked to march in the high school snare line"". Since high school, Sean has gone on to play in numerous bands as well as backing some artists of note. He has played with blues legend Michael Burks of Alligator Records & many others. Sean is now with Wayne Sharp & the SharpShooter Band. They just released their new album ""Living With The Blues"". Sean and the band are touring constantly and are addressing any and all P.R. opportunities to support this project!!! When Sean isn't on the road or in the studio with Wayne Sharp and the SharpShooter Band, he can be found giving lessons, doing session work, or performing drum clinics around the world. Sean currently endorses... Kansas City Drum CompanyAquarian DrumHeadsSoultone CymbalsCarmichael Throne Company