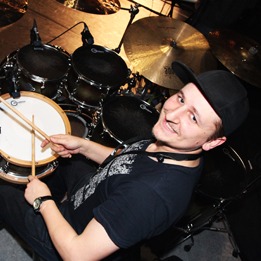 "He is an exceptional talent and incredibly advanced for someone so young. I can only speculate on his growth and enormous potential""- Richie Beirach - Jazzlegend Stan started to teach himself drums after receiving only five lessons and played his very first gig at the age of eight in front of a few hundred people. It was an open air concert with his fathers band and they played covers from Stevie Wonder, The Beatles and CCR. At age 13 Stan Neufeld took part in the “Best Young European Musician Competition 2002” and with over 500 applicants and a jury consisting of Bernard Purde, Ian gillan and Joe Porcaro Stan took home first place.From 2008 til 2015 Stan studied Jazz/ Pop music at the Hochschule für Musik und Theater “Felix Mendelssohn Bartholody” in Leipizg under the instruction of Heiko Jung. Since then he has played with and continues to play with many jazz projects and individuals and has won several nation wide competitions as solo artist and as part of a band. One of Stan´s greatest highlights would be being asked by Jazz Legend Richie Beirach to play with him and also Dave Liebman together. In fact, up until the Fukushima catasrophe he was meant to tour Japan with Richie Beirach and Bassist Eddie Gomez...Over the years Stan has gathered valuable live, studio and tour experience with many Jazz and Pop acts such as: Pepe Berns, Werner Neumann, Martin Auer, Johannes Enders, Detlef Bayer, Richie Beirach, Dave Liebman, Luca Sisera, Yves Theiler, Danny Gottlieb, Matthias Tschopp, Antonio Lukaciu, Matthias Eichhorn, Berliner Rundfunkchor, Leipziger Universitätschor, David Timm, Lora Kostina Trio, Artem Sargsyan Quartett, TRIP, Christoph Bernewitz (Clueso), Daniel Bätge (Clueso), Eddie Neufeld, Andre Hayer (Gentleman), Johanna Järemo(Gentleman), Beatroot Stompers, Jenny Garcia, Tila Brea, Arto Mäkelä (Sarah Connor),Michael Fürstenberger, Govinda Abbott, LILOBA, Govinda Abbott, Katy Karrenbauer (Schauspielerin), Bianca Aristia Band (Voice of Germany 2013) and many more.With the original material band “Paradise Ink”, a band where Stan contributes in a compositional manner as well, he played the support band set for SILBERMOND for the „Himmel Auf Tour 2012“.These days many of the above mentioned groups / musicians belong to stan´s network of current colleagues and other than that two days teaching keeps him busy. Since janauary 2017 stan is touring with Nya King (London – Whitney Houston Tribute Show) till 15th of may 2017. There is over 60 shows and a few tourstops at locations like TEMPODROME BERLIN, MESSEHALLE 1 FRANKFURT and OBERFRANKENHALLE BAYREUTH and many more….In 2018 stan is going on GERMANY/SWITZERLAND/AUSTRIA workshop/clinic tour with his own project! Since 2014 Stan Neufeld is a proud endorser of SOULTONE CYMBALS USA and also ROHEMA DRUMSTICKS since 2016 and now a dream came true: AQUARIAN DRUMHEADS became stan`s family! At his young age of under 30 Stan has already gathered 22 years work experience in his field and we can only imagine where his future will take him."