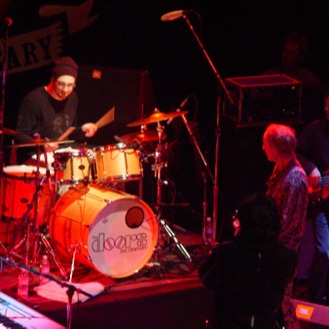 Born the son of an accomplished jazz drummer, there's no wonder why Ty Dennis is receiving rave reviews. Ty was practically born with a pair of drumsticks in his hands and can't remember a time in his life when he didn't play. His early exposures to jazz, rock, and funk influences are major contributors to his unique voice on the drums today.In 2003 Ty was hand picked to fill the drum seat for the departed drumming icon Stewart Copeland with rock and roll legends Robby Krieger and Ray Manzarek in the band The Doors of the 21st Century. Numerous world tours and T.V. appearances helped to expose thousands of fans around the globe to his conviction and command behind the drums.In addition to playing with The Doors of the 21st Century, Ty's muscial diverity enables him to work with an assorted group of artists such as; Martha Davis from The Motels, Elephant Ride, Firebug, Chuck Negron (Three Dog Night), and many others.From sold out concert dates in Argentina, Greece, and the famous Wembley Arena in England to live T.V. appearances including the Carson Daly Show, The Craig Kilborn Show, MTV Japan,VH1 Classics, and VH1's 'Decades Live', Ty continues to deliver world-class drumming on every occasion.