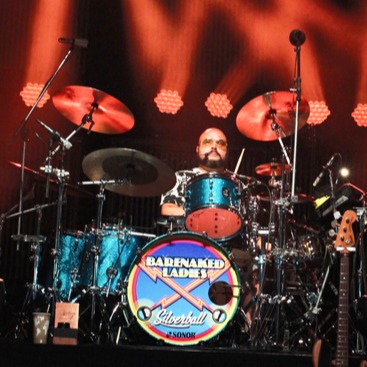 Tyler Stewart has been behind the kit for internationally - acclaimed rock band Barenaked Ladies since 1990. Over 25 years, Barenaked Ladies have toured the world and sold over 14 million records. Stewart sings back up vocals and occasionally rocks the mic center stage during the Ladies high energy and wildly entertaining live shows. Known for their infectious melodies and Billboard hits including "One Week", "Pinch Me" and "The Old Apartment" and for their theme song for the hit CBS comedy "The Big Bang Theory", the Barenaked Ladies show no signs of slowing down, with the recent release of their 14th studio album, SILVERBALL, on Vanguard Records. Tyler's versatile drumming style powers the pop, rock, country and Latin flavors found in Barenaked Ladies musical stew. Live, the bands spontaneous musical and humorous improvisations keep Stewart on his toes - responding to melodic and vocal ideas that often become instant songs on the fly. Tyler's background in Drum and Bugle Corps, and high school orchestras and stage bands still add color to Barenaked Ladies songs, and he credits these early experiences for giving him his passion for drums and percussion.Tyler is as passionate about hockey and food as he is music, and plays recreationally for the Jokers Hockey Club in Toronto. When not working with Barenaked Ladies, Stewart loves nothing more than being at home, cooking delicious food and watching hockey with his wife Jill, and their three daughters: Mili, Hazel and Carmen.